One of the most touching post-resurrection appearances of Jesus was when He appeared to Mary Magdalene in the garden.  It is recounted in John 20:14-18.  She was at the tomb, had seen the angels and heard them say that Jesus was not there but risen.  However, she was so overcome with grief it had yet to truly register with her brain.    They (the angels) said to her, “Woman, why are you weeping?” She said to them, “They have taken away my Lord, and I do not know where they have laid him.” 14 Having said this, she turned around and saw Jesus standing, but she did not know that it was Jesus.  Jesus said to her, “Woman, why are you weeping? Whom are you seeking?” Supposing him to

be the gardener, she said to him, “Sir, if you have carried him away, tell me where you have laid him, and I will take him away.” 16 Jesus said to her, “Mary.” She turned and said to him in Aramaic, “Rabboni!” (which means Teacher).

This scene touches me as it only took Jesus saying her name for her to recognize Him.  In John 10:27 Jesus told the disciples that the ones who know Him will recognize His voice and follow Him  ” My sheep hear my voice, and I know them, and they follow me.”   Mary knew immediately that it was her Lord saying her name.  She was instantly comforted and wanted to touch Him.  He cautioned her not to touch him, but to go and tell the disciples that she had seen the Lord!  Jesus said to her, “Do not cling to me, for I have not yet ascended to the Father; but go to my brothers and say to them, ‘I am ascending to

my Father and your Father, to my God and your God.’” 18 Mary Magdalene went and announced to the disciples, “I have seen the Lord”—and that he had said these things to her.

Mary needed to have the Savior’s touch.  He touched her with His voice and He gave her the reassurance that all would be well.  Jesus confirmed He had indeed risen, was the Messiah and that  He was alive.  Jesus showed her that there is eternal Hope in Him!  She got all of those reassurances from Jesus saying her name!

What do you need Jesus to say to you today?  Do you need Him to call you by name, give you a word of encouragement, a word of guidance, or simply a word of Hope?  He can say and do it all- if you just ask Him.   Seek Him today and He will be found!

Jesus appeared to the disciples and others to show them living proof that He was alive.  He did not appear just once but multiple times between His resurrection and Pentecost when He returned to heaven.  Over the period of 40 days He met in various places to reassure them He was alive, had returned from the dead and that their faith in Him was real and true.   On Resurrection Sunday He met the women in the garden, and the two men walking on the Road to Emmaus.  In today’s passage, Jesus appeared to those disciples gathered in the Upper Room.

“While they were still talking about this, Jesus himself stood among them and said to them, ‘Peace be with you.’  They were startled and frightened, thinking they saw a ghost.  He said to them, ‘Why are you troubled, and why do doubts rise in your minds?  Look at my hands and my feet. It is I myself! Touch me and see; a ghost does not have flesh and bones, as you see I have.’  When he had said them he showed them his hands and feet.  And while they still did not believe it because of joy and amazement, he asked them, ‘Do you have anything here to eat?’ They gave him a piece of broiled fish, and he took it and ate it in their presence.”   Luke 24:36-43

What was their immediate concern?  Is Jesus real or are we experiencing hallucinations?  What was Jesus immediate concern?  Jesus wanted them to have and be at peace.  He did not want them anxious or fearful but open and willing to welcome Him into their midst.   What is your reaction when confronted by Jesus?   Do you doubt who Jesus is and question His reaching out to you or do you welcome Him with peace?

Jesus reassured the disciples that He was a real living being just as He promised.  He proved it to them by calmly showing them His hands and feet- pierced at the cross, and eating food with them.

How does Jesus make himself known to you?  Does He come to you in prayer, in the helping hands of others or through His Word?   Jesus can and does reveal himself to us if we are open and willing.  In Matthew 7:7 Jesus tells us, “Ask, and it will be given to you; seek, and you will find; knock, and it will be opened to you.”   Be a seeker today and know the joy of His presence.  Be amazed as you encounter the living Lord Jesus, just as the disciples did in the upper room.  Each encounter with Jesus brings new revelation and understanding of who He is!   Be open to Him and He will give you His peace.

If you could write down your prayers, what would they look like?  Are they filled with joy, praise, thanksgiving, submission, confession and petitions?  In reality, our prayers are filled with all of these but often vary according to our need or level of distress in life.  The psalmist in Psalm 119:33-40 pleads with God.  Look at the verbs as you read.

33 Teach me your decrees, O Lord;
I will keep them to the end.
34 Give me understanding and I will obey your instructions;
I will put them into practice with all my heart.
35 Make me walk along the path of your commands,
for that is where my happiness is found.
36 Give me an eagerness for your laws
rather than a love for money!
37 Turn my eyes from worthless things,
and give me life through your word.
38 Reassure me of your promise,
made to those who fear you.
39 Help me abandon my shameful ways;
for your regulations are good.
40 I long to obey your commandments!
Renew my life with your goodness. 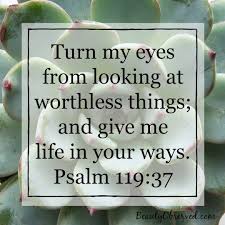 The psalmist is struggling with his daily life and desires God to guide him away from temporal things to a focus on eternal truths that will change and renew his life.  God’s goodness will transform our lives is we submit to His truths and follow Him.  Do you desire God’s help with your life problems?  Seek His wisdom and truth.  Open His Word and bow in prayer.  He will find you, just like He promised.  Hebrews 11:6 challenges us to believe and take that step of faith. “And without faith it is impossible to please him, for whoever would draw near to God must believe that he exists and that he rewards those who seek him.”   Does that describe you and your search for God?  Turn to Him in faith today.  He will find you.

Walking with Him is an adventure in faith,