When I think of the word friendliness, I think of cheerful actions and someone who outwardly welcomes others.  The dictionary defines friendliness as having the characteristic of a friend.  A friend is one who knows you, is fond of you, stands with you on the same side of a struggle, supports, helps and is considered reliable.   Scripture gives us several examples that align with this definition of being a friend.

One example that comes to mind is the friendship between David and Jonathan.  David was the future king of Israel, anointed by Samuel the prophet and pursued by the current king, Saul.  Jonathan was Saul’s son and David’s friend.  They protected each other and knew God had a specific plan for each of them.  In spite of all the turmoil surrounding Saul’s pursuit of David and trying to kill him, Jonathan remained David’s faithful friend.  Their story is recorded in 1 and 2nd Samuel.

Scripture also speaks of friendship with God.  Abraham was described as a friend of God in James 2:23.  “Abraham believed God, and it was credited to him as righteousness, and he was called God’s friend.”   Jesus named us as friends, too.  John 15:13-15,17 “Greater love has no one than this, that he lay down his life for his friends.  You are my friends if you do what I command. I no longer call you servants, because a servant does not know his master’s business.  Instead, I have called you friends, for everything that I learned from my Father I have made known to you…. This is my command: Love each other.”    In addition, Proverbs 17:17 gives us when and how long we are to be friends.  “A friend loves at all times, and a brother is born for adversity.”

What am I to take away from these examples of friendliness?  God wants to call us His friends but it requires that we obey Him and seek His righteousness.  We need to be about God’s business with our lives- loving, helping and supporting others.  We need to stand with each other in times of adversity-hand in hand as brothers.  This is certainly more than having a cheerful attitude.  I need to ask myself, am I being a friend and exhibiting friendliness towards my brothers and sisters in Christ?  Am I being friendly to others in His name?  Hebrews 13:1-2 reminds us “Keep on loving each other as brothers.  Do not forget to entertain strangers, for by so doing some people have entertained angels with knowing it.”

Look for those angels today as you serve Him striving to walk in friendship with Almighty God, 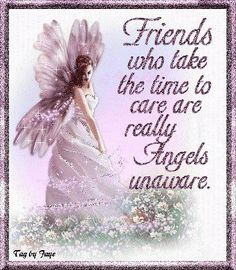