After His arrest Thursday night, Jesus endured 4 trials.  He went before the religious leaders, the Sanhedrin, then Pilate who sent him to Herod, the Jewish head of state, then back to Pilate.  The Jews wanted Jesus killed but they did not have the authority to execute Him.  They demanded that Pilate, the Roman authority in Palestine, crucify Him.  Pilate had Jesus flogged and beaten even though Pilate knew Jesus to be innocent.  He had hoped this cruel treatment would pacify the Jews.  However, the crowds pressed him and requested the release of the criminal Barabbas instead of Jesus since it was the custom to release one convicted person as a token of goodwill at the Jewish Passover.  The crowds demanded that Jesus be crucified and Pilate agreed to appease the angry and vocal Jewish crowds.   Jesus was then made to carry His own cross to the place of execution, Golgotha.  Along the way Jesus stumbled and Simon of Cyrene was conscripted to carry the cross.  Jesus was then nailed to a cross and hung to die.  His clothes were stripped from Him and as He hung naked on the cross, soldiers gambled for his clothing at the foot of the cross.

I can not imagine the pain, anguish, humiliation and shame Jesus endured on my behalf. As He took all the sins of the world, yours and mine, upon His pure and innocent body, the sin took him to a place he had never been before.  The sin separated him from God, His holy Father.  He did this so that His sacrifice could atone for our sins.  1 Peter 2:24 explains what Jesus accomplished for me.

24 He personally carried our sins
in his body on the cross
so that we can be dead to sin
and live for what is right.
By his wounds
you are healed.  (NLT)

I never realized how sweet Jesus’ final words from the cross were until recently.  “‘It is finished.’ With that, he lowered his head and gave up his spirit.”  John 19:30   He declared with His final breath that the work of redemption was complete,  and He had accomplished what the Father had sent Him to do- pay the penalty for the sins of all who would believe for all eternity with His blood.  Having accomplished His work, He gave up His spirit.  His life was not taken from Him but He gave it up voluntarily at the time of His choosing.  Only God can choose the time of His death.  When we speak of someone dying, we say the person has life take from them.  We don’t get to chose the hour or minute of our last breath but Jesus chose when and where He was to die for you and me.  I am staggered by His love and commitment to me that He would endure such punishment and isolation from God on my behalf.  As you ponder the cross today, think of all Jesus gave up and all He did on your behalf. 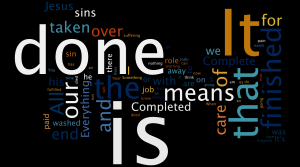 Prayer:  Father, the enormity of Jesus’ sacrifice and your love in sending Him to die for my sin is incomprehensible.  ‘Your ways and not my ways’ Isaiah reminds us.  I am so thankful for your plan of redemption  and stand humbly before you because of Jesus, my Savior.  Praising you in Jesus name, Amen.                (Isaiah 55:8)