Jesus was busy on Resurrection Sunday.   He appeared on the Road to Emmaus, to the women in the garden, to Peter and to a gathering of disciples in a closed room. John records this appearance in John 20:19-22.  I like the Amplified translation as it makes

what happened clearer. 19 So when it was evening on that same day, the first day of the week, though the disciples were [meeting] behind barred doors for fear of the Jews, Jesus came and stood among them, and said, “Peace to you.” 20 After He said this, He showed them His hands and His side.”  The fact that Jesus appeared to them without opening the door tells us He was a spirit.   Yet, he showed them His hands and side that had been pierced at the cross which tells us He was physically real.  Only Jesus could be both in His resurrection body.  He begins with the common Hebrew greeting- ‘Peace to you’.  This shows Jesus’ love and sensitivity as perhaps they would have expected a harsh word from Jesus for abandoning Him after His arrest.  They received peace and warmth from their Savior not rebuke or criticism.  When the

disciples saw the Lord, they were filled with great joy. 21 Then Jesus said to them again, “Peace to you; as the Father has sent Me, I also send you[as My representatives].” 22 And when He said this, He breathed on them and said to them, “Receive the Holy Spirit.”  Their response to Jesus was pure joy!  Then He sent greetings of peace to them and gave them orders to tell others.   He was sending them with power from His Holy Spirit to go and be His representatives, telling others of His death, resurrection, salvation and forgiveness of sins.  Jesus breathed on them power that would sustain them until the coming of the Holy Spirit 50 days later at Pentecost.

What is your response to the risen Savior?  I’m sure the disciples had various reactions like joy that He was alive, curiosity about His wounds, questions about their purpose in life now that He is no longer teaching them day to day?  Jesus answered their questions, shared in their joy and gave them purpose.  It is the same purpose Jesus has for us- tell others the good news of the gospel.  He desires that everyone hear how He saves us from eternal punishment for our sins and forgives us, and Paul reminds us in Romans 10:17   “So faith comes from hearing, and hearing through the word of Christ.”  Jesus sent them, and us too, into the world 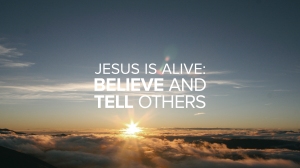 where we live to tell others the good news of Christ.  We have to speak out and speak up for Jesus.

Who will you joyfully tell today?