Matthew 21:1 and 7-11   As they approached Jerusalem and came to Bethphage on the Mount of Olives…..They brought the donkey and the colt, placed their cloaks on them, and Jesus sat on them.  A very large crowd spread their cloaks on the road, while others cut branches from the trees and spread them on the road.  The crowds that went ahead of him and those that followed shouted, “Hosanna to the Son of David!”  “Blessed is he who comes in the name of the Lord!”  ” Hosanna in the highest!”   When Jesus entered Jerusalem, the whole city was stirred and asked, “Who is this?”  The crowds answered, “This is Jesus the prophet from Nazareth in Galilee.”

Last March I had the privilege of walking the Palm Sunday Road that Jesus rode down on his donkey.  The view that Jesus had of Jerusalem and the temple mount is breathtaking.  The descent down the Palm Sunday Road takes you  into the Kidron Valley.  Jesus entered the Eastern Gate that is now blocked.   The Jews today desire to be buried on this hill as they believe that Messiah will come and enter triumphantly through this gate into Jerusalem.  They want to be ready.  They are right, Jesus the Messiah did enter that Eastern Gate but they missed His coming.  The Muslims who now occupy the temple mount with their mosque have blocked this entrance to keep Messiah from entering.  They too missed Him when He came humbly on a donkey.

As you journey down this hill,  do you see the great need of the city for a Savior?  Jesus loved Jerusalem and its people just as He loves you and me.  Knowing what lay before Him, He must have been filled with love and compassion for us as He came down that road.  Don’t miss Him like the Jews and Muslims did, know Jesus and love Him today.  Praise Him with shouts of “Hosanna!”  ” Blessed is He who comes in the name of the Lord!” Join the crowd in proclaiming Him your Savior today! 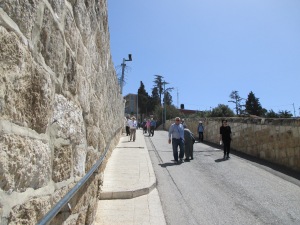 Be open to Jesus, our Savior, today!