Good Friday is the day of the crucifixion of our Lord Jesus Christ.  There are so many thoughts and images associated with this day it is hard to single out one event.  As I was reading the events in the gospels, I was drawn to the sign they posted at the cross that told the crime of the accused.  All of the gospels say the sign read:  the King of the Jews in multiple languages.  When the chief priests objected that it should say this is what Jesus claimed, Pilate said “What I have written, I have written.” John 19:22   Perhaps Pilate was recalling his interview with Jesus held earlier in the day and recorded in John 18:33-37.  Pilate then went back inside the palace, summoned Jesus and asked him, “Are you the king of the Jews?” “Is that your own idea,” Jesus asked, “or did others talk to you about me?”  “Am I a Jew?” Pilate replied. “It was your people and your chief priests who handed you over to me. What is it you have done?”  Jesus said, “My kingdom is not of this world.  If it were, my servants would fight to prevent my arrest by the Jews.  But now my kingdom is from another place.”  “You are a king, then!” said Pilate.  Jesus answered, “You are right in saying I am king.  In fact, for this reason I was born, and for this I came into the world, to testify to the truth.  Everyone on the side of truth listens to me.”

The Jews had looked for the Messiah to come as a conquering king to rescue and save them from their lives of oppression at the hands of occupying powers.  They had overlooked all the prophesies about the suffering servant Messiah who would come to save His people from their sins.  They were right that Jesus would be the conquering King but that is still future to us when Christ returns.  Revelation 17:14 “They will make war against the Lamb, but the Lamb will overcome them because he is Lord of lords and King of kings- and with him will be his called, chosen and faithful followers.”  The Lamb of God is Jesus and when He returns He will overcome all evil.  When Jesus returns in victory Revelations 19:16 gives us this description “On his robe and on his thigh he has this name written:  KING OF KINGS AND LORD OF LORDS.”   Just as Jesus told Pilate, He is the king.   Philippians 2:9-11 describes Jesus’ true place before all humanity  “Therefore God exalted him to the highest place and gave him the name that is above every name, that at the name of Jesus every knee should bow, in heaven and on earth and under the earth, and every tongue confess that Jesus Christ is Lord, to the glory of God the Father.”  He is King Jesus!

Is Jesus your King?  Today is the day to proclaim Him as your king.  He came to seek you and save you and die so that you could know the Lord fully and belong to Him.    Let Him know of your love and devotion for this ultimate sacrifice.

I bow before you King Jesus, 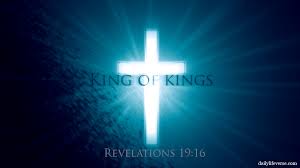