After Jesus’ resurrection, he appeared many times over the next 40 days.  He appeared in human form to individuals and groups alike able to talk and eat with them.  Yet,  He had the ability to appear and disappear as He willed.  Jesus first appeared on Resurrection Sunday to the women at the tomb,  then to both Mary and Peter in the garden.  Later that Sunday was on the road to Emmaus,  two of the believers were walking along discussing the things that had happened.  I can imagine they were recounting Jesus’ death, their own sadness, Jesus’ resurrection appearance to the women in the garden and their hope that all of this was true and Jesus really was risen. 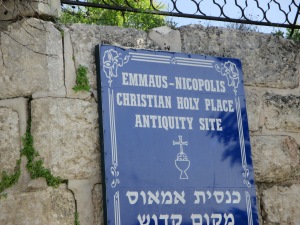 Luke 24: 27-33  “And beginning with Moses and all the Prophets, he explained to them what was said in all the Scriptures concerning himself.  As they approached the village to which they were going, Jesus acted as if he were going farther.  But  they urged him strongly, ‘Stay with us, for it is near evening; the day is almost over.’  So he went in to stay with them.  When he was at the table with them, he took bread, give thanks, broke it and began to give it to them.  Then their eyes were opened and they recognized him, and he disappeared from their sight.  They asked each other, ‘Were not you hearts burning within us while he talked with us on the road and opened the Scriptures to us?’  They got up and returned at once to Jerusalem.”

I like to think of their encounter with Jesus as a powerful reminder to me that Jesus can and does come to me as I live my daily life.  He meets me where and when I need him most.  He will bring His words, the Bible, to my remembrance, so that I might be strong and courageous as I walk through my day.    Also, encounters with Jesus stimulate my thinking and prod me to stretch my faith.  The response of these men on the road to Emmaus was to beg Jesus to stay with them,  and then they  rushed to tell others that He was alive.   What about you?  Do you ask Jesus to stay and walk with you each day?  Do you seek His presence and help?   Are you excited and motivated to tell others about our risen Lord?

Consider all He has done for you and trust in all He will do for you as you walk away from the cross.  Has this season of Lent and the celebration of Easter drawn you closer to Him?  Does it excite and motivate you to tell others of our risen Lord?

Walk with Him today,