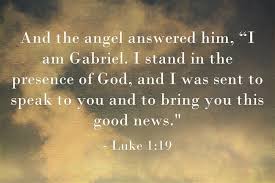 Luke 1:18-25   “Zechariah asked the angel,’How can I be sure of this?  I am an old man and my wife is well along in years.”  The angel answered, ‘I am Gabriel.  I stand in the presence of God, and I have been sent to speak to you and to tell you this good news.  And now you will be silent and not able to speak until the day this happens, because you did not believe my words, which will come true at the proper time.’  Meanwhile the people were waiting for Zechariah and wondering why he stayed so long in the temple.  When he came out, he could not speak to them.  They realized he had seen a vision in the temple, for he kept making signs to them but remained unable to speak.  When his time of service was completed, he returned home.  After this his wife Elizabeth became pregnant and for 5 months remained in seclusion. ‘The Lord has done this for me,’ she said. ‘In these days he has shown his favor and taken away my disgrace among the people.'”     Zachariah questioned  God’s messenger and doubted God’s Word.  Improbable as a late life pregnancy was for this aged couple, Zachariah was unable to accept the power of God when presented to him.  His doubt earned him 9 months of silence.  Elizabeth was rewarded for her faith and her shame of being barren was taken away by God’s grace.

What does this tell us about God?  He is the Creator of all life within us and He caused Zachariah to be mute for 9 months for his doubt.  Zachariah learned that the Creator of the universe, the one who spoke the world into existence with His Words is to be believed or there will be consequences.  As Creator God everything came from Him, what we can see and what we cannot see-heavens, angels and the whole spiritual and physical world.  God spoke all these things and they came into existence.  God alone is able to bring something out of nothing.   He brought a baby to Zachariah and Elizabeth when they were aged. He brought muteness to Zachariah for a limited time to teach him obedience and to grow his faith.

What about you?  Do you believe God’s Word and accept His Word, the Bible, as truth?  Or do you doubt?  Unbelief brings severe consequences as Romans 3:23  “The wage of sin is death.” reminds us. Hebrews 3:12 admonishes us “See to it, brothers, that none of you has a sinful, unbelieving heart that turns away from the living God?   Will you look to Jesus this season and seek Him in faith?  Belief in the Creator God brings great blessing and hope.

Living in faith and trusting in Creator God, 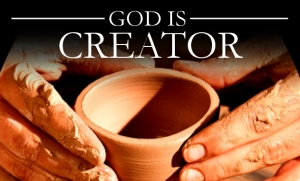 2 thoughts on “The rest of the story…..consequences for Zachariah”