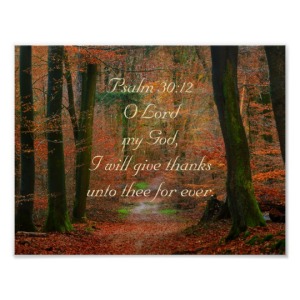 You have turned my mourning into joyful dancing.
You have taken away my clothes of mourning and clothed me with joy,
that I might sing praises to you and not be silent.
O Lord my God, I will give you thanks forever! (NLT)

David described his state of thanksgiving as being eternal in Psalm 30:11-12 .  Why was he going to be thankful forever?  Earlier in the Psalm David said God had lifted him out of the pit, saved him from his enemies, healed him physically and spiritually, had shown him forgiveness and favor.  David had experienced God’s forgiveness as he mourned over his sins.   Paul quotes David’s Psalm 32 in Romans 4:7-8 ““Blessed are those whose transgressions are forgiven, whose sins are covered.  Blessed is the one whose sin the Lord will never count against them.”  Experiencing God’s forgiveness, seeing that God had covered his sins and that his sins would never be used against him in judgement made David eternally thankful and filled him with joy.

What about you?  Have you experienced God’s hand lifting you out of despair or trouble, have you been rescued by God from your enemies or really bad situations, has God touched you physically or spiritually to heal you, have you been given favor by God, blessings you did not expect and in no way deserved?  God had shown himself faithful to David and David recognized this.  His responds was eternal thanks that was filled with joy.  What is your response to God’s grace and forgiveness in your life?

Begin today to cultivate a spirit of thanksgiving that is based on God’s grace and forgiveness.  You will experience joy from now to eternity.

2 thoughts on “How long will your thanks last?”