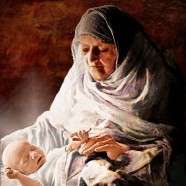 “There was also a prophetess, Anna, the daughter of Phanuel, of the tribe of Asher.  She was very old; she had lived with her husband seven years after her marriage, and then was a widow until she was eighty-four.  She never left the temple but worshipped night and day, fasting and praying.  Going up to them at that very moment, she gave thanks to God and spoke about the child to all who were looking forward to the redemption of Jerusalem.”  Luke 2:36-38an

Mary and Joseph had just encountered Simeon and now they faced an old woman who was known as a prophetess.  There are a few women who speak for God under His guidance in the Bible.  Deborah (Judges 4:4) and  Aaron’s sister Miriam (Exodus 15:20) are the most well known.  Anna was known for her devotion to the Lord and constancy in prayer and worship.  Wouldn’t you have loved to have been there that day and heard what she said about Jesus and what He would accomplish?  Her focus was on the redemption of Jerusalem meaning the Jewish people.  She knew that God was just and that He would redeem and rescue her people with this child  just as He had promised.

How is God just?  God’s justice is perfect.  His decisions are always based on His righteous character.  God cannot ignore sin because He is holy.  It would be unjust to ignore wickedness, rebellion and sin. God is just and does not show favoritism.  Every penalty will be fair and right.  God does not treat His children as their sins deserve because Jesus suffered the full punishment for our sins.  Because God is just, He will never punish His children for the sin for which Jesus paid on the cross.  Anna could see this sacrifice in Jesus’ future that day and knew He was the key to the redemption of God’s people. 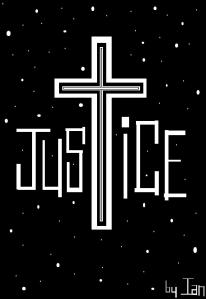 How are you and I affected by God’s justice?  We can count on God to always be Holy and intolerant of sin.  We can trust that His justice is and has always been perfect as He is unchanging in character and does not show favorites.  God is true to His Word and will do as He promised in Scripture.  He will be victorious over Satan and Jesus will return again.  We have proof of God’s justice.  He dealt with our sin through the death and resurrection of His Son Jesus.  Now that our sin has been dealt with, it is over and God’s justice is done!  Praise Him for His Justice and keep pointing others to Jesus.  Live focused on things with eternal value that glorify God.  Cling to God’s promises in Scripture and pray for those that do not know Jesus as Savior.  Do not judge others but leave justice to God. Trust in God’s justice it is and always will be perfect.

Depending upon our Just God,